We are playing The Coney Island Museum!
Which is, to us, evidence that we have finally “made it”.
We’ve been rocking pretty hard this summer, and this is the last show before we take a few weeks off, and it’ll be even more special than our normal degree of relative “special-ocity”.

Sunday, August 23
Uncle Monsterface Goes to Coney Island!
with an Exciting QUESTION AND ANSWER session to follow
(this is part of the museum’s “Ask the Experts” Series)
ALL AGES!!!! $5
4pm – EARLY SHOW which will be punctual – we are the ONLY band!
The Coney Island Museum
1208 Surf Ave, Brooklyn
Take the D, Q N or F train to Stillwell Avenue (last stop).
Tell FACEBOOK that you are coming! It needs to know! 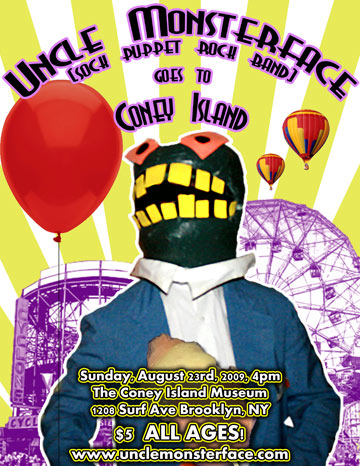 We’re experts!
(But not vampire-finding experts. We need a vampire for this show. Anyone wanna be a vampire? Free cd!)

As this show marks the passing of the below-mentioned “Sweat Sexxxy” from the live show, we just might usher in a new stage antic. And it just remind some of you of an old one. Some sort of contest, maybe?