Our first try at “Adventure Pizza” as a part of the Object Movement Festival was a wonderful success. Have a look at the actual evidence at the link above!

Hi friends! We’re thrilled to announce that Uncle Monsterface is a part of the Fall 2020 Digital Puppetry Lab with The Object Movement Festival and the Center at West Park!
Saturday, September 21 at 8pm
Tickets:
https://www.centeratwestpark.org/events/object-movement-fall-2020-2

Monsterface Industries is collaborating with the tremendous director and puppeteer Leigh Walter on an experimental exploration of our ever-growing Choose-Your-Own-Rock-Show: ADVENTURE PIZZA!

Spoilers, this is the map for this excerpt!

Adventure Pizza was originally imagined as a live stage show, but for now at least we’ve adapted it to puppet-based toy theater!

Greetings, Team:
In case you needed it and in honor of the impending autumn, Uncle Monsterface’s last studio album, “Rise of the Lava Men,” is now available on all streaming places.

And that about brings us up to date on the Monsterface Streaming Situation. There’s still more stuff and deeper cuts on our Bandcamp, which sends us much more money and supports awesome causes. But we get it, the kids love their streams.

And now for the profound revelations to be found in Monsterface Fun Facts:

-“Rise” features a whole other amazing lineup for Uncle Monsterface:
Hidden Harlan Muir providing keyboards, vocals, horns and horn arrangements. AND, not to be outdone, Spooki Old Epic Swanson on drums and vox and as our lead designer. These humans are great. And you know, Marty doing Marty-stuff and Paradise Dan being a magical warlock.

-“Rise” was imagined as a Saturday Morning cartoon that never happened, set on Uncle Monsterface’s home base of Dino-skeleton Island. In that interest, we built GI Joe style “Battle Bio Cards” for every character. Check some out on Youtube:

-“Rise” features phenomenal guest stars. “Cosmic” Jocelyn Mackenzie channels the powers of whole Volcanoes as she sings on many of the songs. She’s particularly proud of the entire cheerleading squad she created for “Sports Robot.” Jocelyn can also often be found supporting us as our live drummer and styling us with her all-powerful mind. What can’t she do? Nuthin. Follow her, as she’s about to drop a universe-changing album.

-And another of our favorite artists and humans ever, @corn mo is featured on several songs. If you don’t know who Corn Mo is, stop what you are doing, and go listen to his banshee wail of freedom sing you some of the greatest songs mankind has ever dared feel course through its collective veins..

-“Rise” was funded by a crazy Kickstarter, and there is one final reward we have yet to make good on… a bunch of original songs for our most beloved backers. We’ll keep you in suspense, but if you’ve read this much, consider this a clue as to upcoming announcements…

– While Marty often writes some drums or synth parts, this was the first album he played a real live instrument on: good old bass!

We could go on and on about “Rise,” it was a glorious and wildly ambitious project that took Herculean efforts from countless talented folks. It is dark and weird and funny and dense and a real beast of a beauty. What are you waiting for, go have a listen.

Greetings, Team.
We’re giddy to announce that our second full-length album, 2008’s “This Is An Adventure” is once again available on all streaming platforms.

“Adventure” is a very special album from this pile of special monsters. This beautiful carnival of songs was born out of our collective will to all move to Brooklyn and go on this grand adventure that is a band together. It’s deeply collaborative at its core, and holds many songs that became true staples of our show, and others that we simply love. We’re just dang proud of it as a big old album of songs.

The artwork is by the incredible Monster-friend, Daria Tessler, whose work you should find and dive into at animalsleepstories.com like the magical portal of wonders that it is.

Please check it out, spread it around, leave reviews, and do that sort of stuff.

We are pleased to offer our second recording, 2006’s EP Nintendode available once again on all major streaming platforms. Please take a listen, add it to playlists, follow us, do those things.

Uncle Monsterface released Nintendode in 2006 in eager anticipation of the weird and wonderful (and now rather ancient) Nintendo Wii – it came out on the same day. In present-day, we tore ourselves away from playing Nintendo’s glorious new version of Animal Crossing to re-release it.
More to come!

Hi team!
For the first time in many years, go find our first full length, Letter Green (I Love You) on Spotify, Apple Music, and all major platforms! Hooray!

For the newsies:
Monsterface Industries continues to stir like several ponies (in the night), hopefully here on time to bring a little smile and a confusing dance during these wild times.

Truth time: over the years, we let all of our albums lapse from the major streaming services. News time: as of today, we’ve begun to remedy this calamitous reality, one little album at a time, in order.

Please follow us on whatever your streaming service of choice is, and bear with us as we get all the platforms and profiles aligned.

Give everyone you know a Monster Hug, here’s one from us!

We are so excited to announce that we’ll not only be opening for the tremendous and stratospheric comet of joy and talent, Jocelyn Mackenzie , we’ll also be introducing her as Cosmic Jocelyn on the drums for Uncle Monsterface!

Of note, we’ll be joyfully re-joined once again by the mighty Epic Swanson, now taking over bass duties so that Marty can focus on jumping around.

THIS SHOW IS GOING TO BE SO FUN! Please share it so we can get people there, and please buy advance tickets so that you can not only save moneys, but the venue can think we’re cool and have us back.

The geeks have inherited the earth, rock stage, and local economy.
Listen up and get down.

Friday, May 26, 2017
Uncle Monsterface returns to the stage in new old form in celebration of comics and rock legend James Kochalka‘s 50th Birthday! 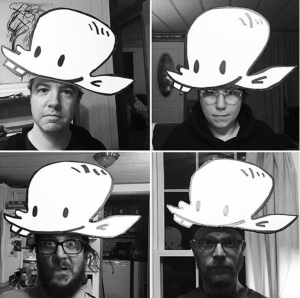 Back to the stage with a new specialty line-up, featuring old school visuals and tunes, Epic Swanson‘s return – but on BASS! And the official introduction of the phenomenal COSMIC JOCELYN MACKENZIE on drums and vox!

Hopefully we’ll have some more shows to announce soon!

Check it out, tell your friends, alert your enemies, feed your pets! (we recommend going into fullscreen for the FULLY IMMERSIVE UNDEAD EXPERIENCE!)

Vampire Boy’ has been a real labor-of-love from the current rag-tag crew operating under the suspicious auspices of Monsterface Industries. Learn more about the process at martystuff.com

Please share this completely independently produced animation, we want it to get seen, and we want to keep the story going!

Just in time for Candy Day! Get cavities! Watch our show!

So mark your calendars with a big bloody X and tell your friends to subscribe to our Youtube Channel! 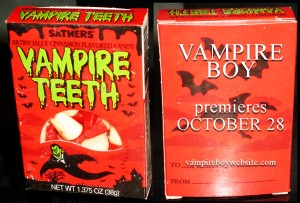