Holy continent full of awesome.
This show is taking the best show that you have ever seen to school. A brand new school. For people with many large brains.

The Studio at Webster Hall is located at 125 East 11th St in NEW YORK CITY!

Tell Facebook that you are coming! It loves to hear about the things that you do! 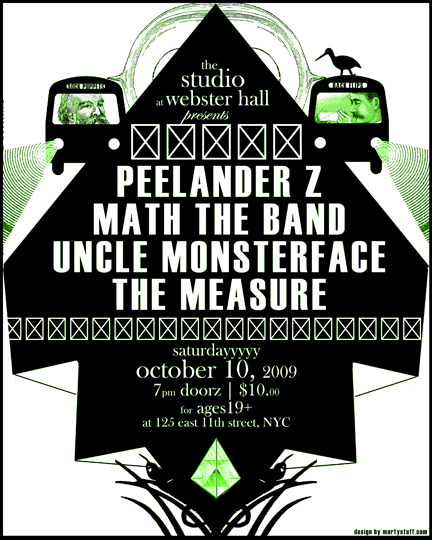 Seriously, people of the world, this is a show to see. If it isn’t enough to see our giant mashed potato fight a vampire with a huge head, then come for the aerobic awesomeness of our family band Math and the action punk back-flips of the mighty Peelander Z.

It might also be slyly and duly noted that this could well be one of the last times you’ll get to see us in a while WITHOUT a live drummer. If ever there was a sneaky announcement, that sure was one.

AND! “Jokey Jingles”, our FREE FOR OUR TEAM MONSTERFACE E-MAIL LIST EP of covers is coming so soon! We are almost done! And we are really excited about it! We’ll announce the date really soon, we promise. SERIOUSLY!

Most importantly – keep being awesome. For you are your own continent of mighty powers, and we believe in every island, peninsula, and chain store that populates you.