Sunday, August 25!
We rock the best bar in Brooklyn with a TARDIS for a toilet! 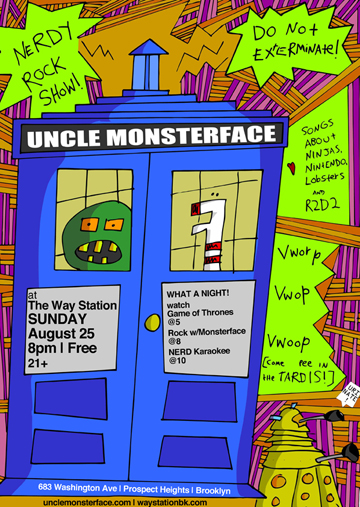 We’ll have just come from 3 days of recording, so we’ll be primed to GET WEIRD.

Hi,
As we’ve mentioned, we’re back and we changed everything.
You will like these shows so much, you will want to MARRY THEM.
Go.

FIRST SHOW IS THIS WEDNESDAY!

This is the first show in our new incarnation! Watch us stumble in terror into the headlights of the oncoming truck of NEW IDEAS!
with
Conversations with Enemies (breezy indie pop zombie fanatics)
Cheers Elephant ( throwback indie similar to The Kinks)
DISASTERADIO ! You’ve gotta check out their music video

It is rumored that we close this show, at 11pm. So drink your Red Bull and come and yell for us, please. And seriously, check out Disaster Radio’s “Gravy Rainbow”. It’s a spiritual bowel movement. In a good way.
FACEBOOK
———————————-

For the first time in our five years as a band, Uncle Monsterface will perform our full set with our NEW LIVE DRUMMER. And we’re premiering it in our home town. Introducing Spooky Old Eric aka The Batman on the sticks, girls and boys. Take a poke for a nickel.

F-nice productions presents
Uncle Monsterface (WORLD PREMIERE OF NEW LIVE DRUMMER!)
with
Math the Band
The Silver City
Business for Pleasure
We are told that the show starts at 8sharp, as muzak must stop by midnight. We are also told that we are on 3rd, before those spazzy math-starz.

Because Facebook is sorta dumb in a lot of ways, there are two event pages, one set up by F-nice, the other by Math. Maybe we should do one, too?! Kooky Facebook. Anyways, make sure you tell it everything that you are doing in triplicate, or you will lose your life-license.

Tickets are now available for the June 6th Mashed Potato vs. Vampire Premier @ the Tank!

Don’t get sold out of the fight of the century!

—-More info after the break—–

TEAM!
Too much excitement.
As you may have heard,
we are premiering the live version of our epic rock song
MASHED POTATO vs VAMPIRE!
June 6, 2009 – 7pm
The Tank! – 354 West 45th
AL AGES! | $7
Here’s the facebok event invite some friends!

IT WILL FEATURE A GIANT MASHED POTATO FIGHTING A VAMPIRE WITH A HUGE HEAD!

In honor of this historic event, we are offering a free download of this EPIC song!
Mashed Potato Vs. Vampire

Learn your parts so that you can sing along!

ever your combat-ready,
uncle monsterface

okay, so, on a monday night about a week ago, dan and marty were at the bar we live next to (a place we’re often wont to be…perhaps a little TOO wont), when our friend abraham the bearded bartender introduced us to a nice young man named ino. it soon came to light that ino also wrote songs, and before we knew it, abraham had witnessed a ‘monsterface industries’-sponsored contract between ino and marty/dan stating that, before 8pm the following day, ino would make a song for us, and we would make a song for him.

that’s just how we roll.

so here’s ours:
Ino’s Theme by Dan & Marty

and here is the one ino made for us: (its pretty sweet)
Dan and Marty by Ino (aka Skeleton Fingers)

by the way, think of this as ‘monsterface minus jimmy’ (cuz he had to work. also known as ‘star-shirted guy the band’. also known as ‘hey where are the cool keyboard/trombone/harmony parts?, the band’). but the sweet lady-pipes you hear are none other than superstar jocelyn mackenzie (of pearl and the beard, hooray)

also by the way, we’re doing a ton of crazy stuff right now, and more on that very soon.

but this was fun and we wanted to share

Good people of the Constitution State! and bordering states!
we are suddenly playing trinity college in hartford, CT this friday.
with math the band and lima! yesyesyesyes

I just updated the “rock music” page here at UMF central. You can listen to all three of our albums (in their entirety) right from the interweb! Now you can always get your monsterface fix when you need it… if you have electricity and internet access and some decent speakers (or maybe one of those fancy iphoney shiny things.)

MUSIC makes it better! Made you a fancy @Spotify playlist to raise your vibration and make your day BETTER. #yearinpush 🌸💀
https://open.spotify.com/playlist/5AvyRygx8CQI0prTFMd1sx?si=PwuydkJWRVKZKH_VkgxFGw
@tmbg @lizzo @itsellenwinter @Righteous_Babes

Oooooh made this awesome wholesome holiday playlist!! Thanks for having us!
@teammonsterface https://twitter.com/she_makes_music/status/1341137697910513668